This visual essay provides an overview of the progress made towards decent work in the context of the 2030 Agenda for Sustainable Development. 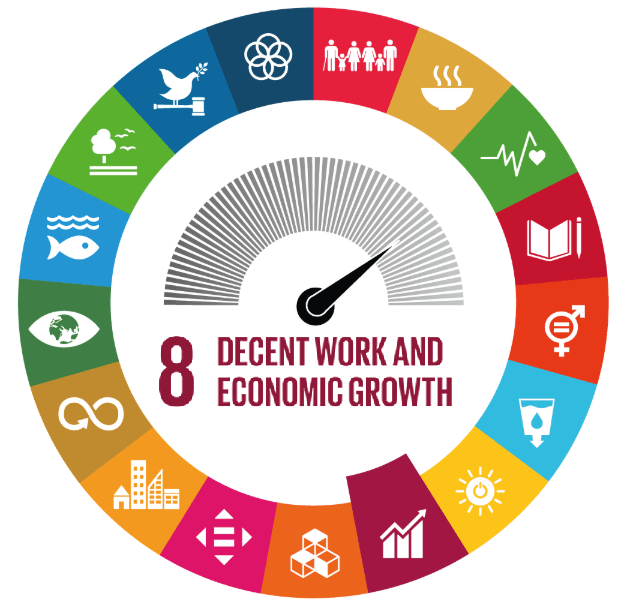 On that note, let us share insights based on labour market-related indicators from the Sustainable Development Goals.

The working poverty rate declined continuously since 2000 in the vast majority of the world’s geographic regions. This is a reassuring trend, reflecting a general improvement in job quality and underscoring the central role that decent and productive employment plays in lifting people out of poverty. However, progress slowed down in the last five years, serving as a reminder of the need to renew efforts in this area. Moreover, the situation remains particularly alarming in Sub-Saharan Africa.

Countries in many parts of the world made significant progress in the extension of social protection. Nevertheless, the human right to social security is not yet a reality for a majority of the world’s population. Only 45 per cent of the global population is effectively covered by at least one social protection cash benefit, while the remaining 55 per cent – as many as 4 billion people – are left unprotected. Trends in social protection coverage vary substantially across regions and depending on the type of benefit. Select an indicator above to find out more.

In 2018, 27 per cent of managerial positions in the world were occupied by women. The share of female managers increased, albeit moderately, since the beginning of the century, and this global upward trend is observed across regions.

Labour productivity rose uninterruptedly since 2010 in nearly all regions of the world. Notable exceptions are Latin America and the Caribbean, which recorded declines from 2014 to 2017, and Sub-Saharan Africa in 2016 and 2017.

Informality remains pervasive around the world: in three-quarters of countries with available data, more than half of all persons employed in non-agriculture are in informal employment. Even more alarmingly, in 35 per cent of countries with data, three out of every four non-agricultural workers are engaged in informal employment. This startling pattern requires urgent attention from policy-makers given the adverse impact of informality on adequacy of earnings, occupational safety and health and working conditions in general.

Rooted in rigid social norms and cultural expectations about women’s roles in society, the gender pay gap, combined with differences in employment opportunities, as well as lower access to social protection, have implications for women’s access to own income. Over time, these differences result in large lifetime income gaps and inhibit gender equality now and in the future.

Based on the latest available data for 62 countries, the median hourly gender pay gap stood at 12 per cent. Among 49 countries with available occupational wage statistics, men enjoy a wage premium relative to women in every major occupational category. The median gender pay gap exceeds 20 per cent in managerial and professional occupations, among crafts and related trades workers, and among plant machine operators and assemblers. Women’s underrepresentation in employment in high-skilled occupations and high gender wage gaps observed among managers and professionals are both important indicators of the glass ceiling faced by many highly skilled women in the labour market.

The situation in terms of access to employment remains particularly worrying for youth, who have a much higher unemployment rate than the rest of the population in all regions. Indeed, the world’s youth were 3 times more likely to be unemployed than adults, pointing to the critical importance of designing appropriate youth employment policies.

In 2018, 21 per cent of the world’s youth were not in education, employment or training. This means that around one out of every five youth around the world are neither gaining professional experience through jobs nor acquiring or developing skills through educational or vocational programs, signalling a need for targeted policies to address this issue.

The situation of youth is particularly alarming in Central Asia, Southern Asia, Western Asia and Northern Africa, where more than one quarter of the young population are not in education, employment or training. In fact, the regional disparities are so significant that the share of youth not in education, employment or training is over twice as large in Central Asia and Southern Asia (27 per cent) than in Northern America and Europe (12 per cent).

While the share of young men not in education, employment or training in the world in 2018 was 13 per cent, the share for young women was around 30 per cent, meaning that young women were over twice as likely as young men to be unemployed or outside the labour force and not in education or training. In order to be successful, strategies for youth employment, education and vocational training must integrate a gender dimension, to account for the strong gender issues particularly affecting young women.

Occupational safety and health is part and parcel of the quality of employment. Yet, unfortunately, many workers around the world are exposed to undue risks in their workplaces. Post-2009 data shows that in several areas (Cuba, Egypt, and the Occupied Palestinian Territory) there were more than 10 work-related fatalities per 100’000 workers and in half of the countries with available data, the number of non-fatal injuries incurred by workers in connection to their work surpassed 1’000 per 100’000.

The global adjusted labour income share is in a downward trend since 2004, which means that the share of national output used to remunerate labour (as opposed to other factors of production) is declining. This decrease was temporarily reversed during the global financial crisis of 2008-2009, due to the sudden contraction in GDP.

It is however important to highlight that in data availability is scarce in general for African and Asian countries, and hence the corresponding regional figures present a large degree of uncertainty.

Last but not least, this chart presents a summary of achievement for SDG 8.  It’s an extract of the ILO report Time to Act for SDG 8: Integrating Decent Work, Sustained Growth and Environmental Integrity.  As the report title suggests, the chart shows three interlinked dimensions: sustained growth, social inclusion and decent work, and environmental integrity. Click on the slideshow to see regional performance or read the report for the in-depth analysis.

Data reporting for these SDG labour market-related indicators will be in February so stay tuned for the next update.