Published for the first time jointly by the ILO and UNICEF, as co-custodians of Target 8.7 of the Sustainable Development Goals, the report takes stock of where we stand in the global effort to end child labour.

Child labour remains a persistent problem in the world today. It is a complex phenomenon as not all work done by children can be regarded as child labour. A distinction must be made between child labour, on the one hand, and children’s activities considered part of a natural socialisation process, on the other hand. Child labourers are those entering the labour market, or those taking on too much work and too many duties at too early an age. Thus, child labour is not defined by the activity itself but by the effect the activity has on the child.

Numbers on the extent, characteristics and determinants of child labour are provided by the Statistical Information and Monitoring Programme on Child Labour (SIMPOC), which is the statistical arm of ILO’s International Programme on the Elimination of Child (IPEC). SIMPOC assists countries in the collection, documentation, processing and analysis of child labour statistics and provides manuals, tools and training materials accordingly.

This page provides a concise overview of the child labour statistics available in ILOSTAT.

working children (term in latest resolution) = children in SNA work (indicator title in ilostat?)… but report states using 18th ICLS not 20th for global estimates. And what about country-level figures?

The broadest concept relating to the measurement of child labour is working children, that is, children engaged in any activity falling within the general production boundary as defined in the 2008 System of National Accounts (SNA) (henceforth, referred to as the “general production boundary”). This comprises all children below 18 years of age engaged in any activity to produce goods or to provide services for use by others or for own use. Different forms of work by children are distinguished as follows:

Three main international human and labour rights standards – the Convention on the Rights of the Child, the ILO Minimum Age for Admission to Employment Convention (No. 138) and the universally ratified ILO Worst Forms of Child Labour Convention (No. 182) – set legal boundaries for child labour and provide grounds for national and international actions to end it. In 2008, the 18th International Conference of Labour Statisticians (ICLS) approved a resolution on child labour statistics that translates these legal standards into statistical terms for measurement purposes. The statistical concepts and definitions underpinning the child labour statistics in ILOSTAT are consistent with this resolution at the country, regional and global levels. Although the 20th ICLS in 2018 adopted a more recent resolution on child labour statistics, which incorporates the framework on the forms of work adopted by the 19th ICLS, most countries still use the previous framework. Once a critical mass of household surveys applies the new statistical standards, it will be possible to produce estimates accordingly.

Child labour comprises work that children are too young to perform and/or work that, by its nature or circumstances, is likely to harm children’s health, safety or morals. In more technical terms, child labour encompasses work performed by children in any type of employment, with two important exceptions: permitted light work for children within the age range specified for light work; and work that is not classified as among the worst forms of child labour, particularly as hazardous work, for children above the general minimum working age. A broader statistical definition includes hazardous unpaid household services, commonly referred to as hazardous household chores.

Employment encompasses any form of market production and certain types of non-market production (principally that of goods such as agricultural produce for own use). Employment includes work in both the formal and informal economy, inside and outside family settings, for pay or profit (cash or in-kind, part-time or full-time) and domestic work outside the child’s own household for an employer (paid or unpaid).
The concept of permitted light work stems from article 7 of ILO Convention No. 138, which states that national laws or regulations may permit the employment or work of persons from 13 years of age (or 12 years in countries that have specified the general minimum working age as 14 years) in light work that is not likely to harm their health or development. It should also not limit school attendance, participation in vocational orientation or training programmes, or the capacity to benefit from instruction. For statistical measurement, light work includes employment and nonhazardous work for less than 14 hours a week performed by children aged 12 to 14.
The worst forms of child labour comprise categories set out in article 3 of ILO Convention No. 182. These entail all forms of slavery or practices similar to slavery, such as the sale and trafficking of children, debt bondage and serfdom, and forced or compulsory labour, including forced or compulsory recruitment of children for use in armed conflict; the use, procuring or offering of a child for prostitution, for the production of pornography or for pornographic performances; the use, procuring or offering of a child for illicit activities, in particular for the production and trafficking of drugs as defined in the relevant international treaties; and work that, by its nature or circumstances, is likely to harm the health, safety or morals of children.
Hazardous work refers to work that, by its nature or circumstances, is likely to harm children’s health, safety or morals. When a country ratifies ILO Convention No. 138 and ILO Convention No. 182, they commit to determining their own hazardous work list. While the list is decided by individual countries after consultation with organizations of employers and workers, the ILO Worst Forms of Child Labour Recommendation, 1999 (No. 190), supplementing ILO Convention No. 182, urges consideration of work that exposes children to physical, emotional or sexual abuse; work underground, underwater, at dangerous heights or in confined spaces with dangerous machinery, equipment and tools, or that involves the manual handling or transport of heavy loads; work in an unhealthy environment that may, for example, expose children to hazardous substances, agents or processes or to temperatures, noise levels or vibrations damaging to their health; and work under particularly difficult conditions, such as for long hours or during the night, or that does not allow returning home each day. For statistical measurement, hazardous work includes that in designated hazardous industries and/or hazardous occupations and/or that entails 43 hours or more per week.

Unpaid household services, or household chores, refer to services children provide without pay for their own households. These include caring for household members, cleaning and minor household repairs, cooking and serving meals, washing and ironing clothes and transporting or accompanying family members to and from work and school. In more technical terms, these tasks constitute a ‘noneconomic’ form of production and are excluded from consideration in the United Nations SNA, the internationally agreed guidelines for measuring national economic activity.

Hazardous unpaid household services involve long hours, an unhealthy environment, unsafe equipment or heavy loads and/or dangerous locations. For statistical measurement, where household chores are included in the calculation of child labour, hazardous household chores refer to those performed by children below the general minimum working age for 21 hours or more per week.

Household services differ from domestic work, the latter of which must be for an employer outside of the child’s own household (paid or unpaid).

Children who work longer hours are also considered as being in child labour. Longer hours is defined as 43 or more hours per week. The figure approximately corresponds to the normal hours of work for adults stipulated by national legislation, mostly from 40 to 44 hours.

Obtaining the final estimate of child labour involves adding two more categories to the calculation: children aged 5 to 11 engaged in any form of employment and children aged 12 to 14 working 14 hours or more per week. For those aged 12 to 14, the 14-hour threshold distinguishes between permissible light work and other work. It corresponds to two hours of work per day over a calendar week, covering both school days and holidays.

Measurement framework for the global estimation of child labour 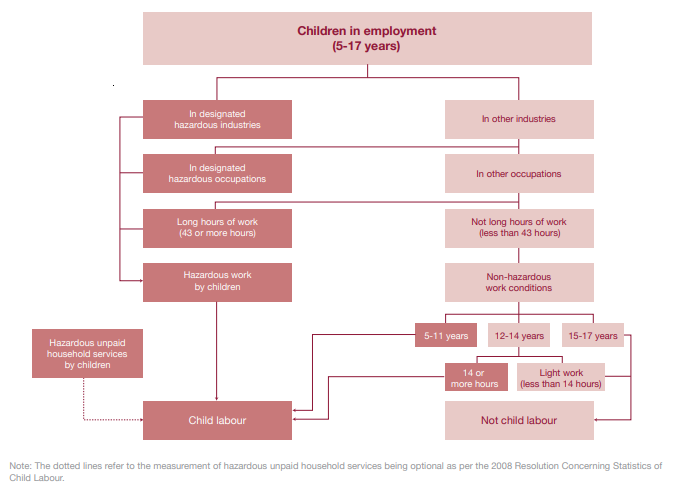 The child labour statistical framework of the ICLS provides a separate measurement of hazardous unpaid household services by children. The indicator captures the performance of household chores by children aged 5 to 14 for 21 or more hours per week.

The country estimates compiled and presented in ILOSTAT have been re-analyzed by ILO and UNICEF in accordance with the definitions and criteria detailed above. This means that the country data values usually differ from those published and presented in national survey reports.

For more information, refer to the SDG metadata sheet.

To produce modelled estimates, regression techniques established relationships between observed data and explanatory variables, which are good predictors of child labour according to the literature. The selection of explanatory variables was based on economic theory and empirical studies on the determinants of child labour. They include GDP per capita, population data by age and rural/urban areas, employment in agriculture, social protection coverage, educational attainment, fertility rate, unemployment, labour income and youth not in employment, education or training.

Although country-level figures are not available in ILOSTAT for European Union (EU) countries, these are included for the purposes of global estimates. However, the age groups available from EU labour force surveys are not in line with the standard age groupings of the global estimates of child labour. Instead of having the desired 15–17 age band, only the 15–19 age band is available. To avoid the loss of the data for the EU countries, an interpolation procedure to model the 15-17 age group as a function of the 15-19 group, and other information, is carried out for the target indicators. The underlying data files used for this procedure are available here.

For more information on global estimates, refer to the annex of the latest global child labour report.

The main sources of child labour statistics are nationally representative household surveys that fully or partially cover children aged 5 to 17. These include multiple indicator cluster surveys (MICS) implemented with the assistance of UNICEF, child labour surveys implemented with the assistance of the ILO, demographic and health surveys (DHS) from USAID, labour force surveys (LFS) and other national household surveys.

For more information on the differences in source types, refer to the Comparison of survey instruments for collecting data on child labour.

While the concept of child labour includes working in activities that are hazardous in nature, to ensure comparability of estimates over time and to minimize data quality issues, work beyond age-specific hourly thresholds are used as a proxy for hazardous work. Further methodological work is needed to validate questions specifically aimed at identifying children in hazardous working conditions.

More broadly, child labour estimates based on the statistical standards set out in the ICLS resolution represent useful benchmarks for international comparative purposes but are not necessarily consistent with estimates based on national child labour legislation. ILO Convention No. 138 contains a number of flexibility clauses left to the discretion of the competent national authority in consultation (where relevant) with workers’ and employers’ organizations (e.g., minimum ages, scope of application). This means that there is no single legal definition of child labour across countries, and thus, no single statistical measure of child labour consistent with national legislation across countries.

In addition, for the purpose of indicator 8.7.1 in the Sustainable Development Goals, and with the goal of facilitating international comparability, fetching water and collecting firewood were classified as unpaid household services (i.e., household chores), a form of production that lies outside the SNA production boundary.