The informal sector represents an important part of the economy, and certainly of the labour market, in many countries. It also plays a major role in employment creation, production and income generation. In lower-income countries with high rates of population growth or urbanization, the informal sector tends to absorb most of the expanding labour force in the urban areas. Informal employment offers a necessary survival strategy in countries that lack social safety nets, such as unemployment insurance. In these situations, indicators such as the unemployment rate and time-related underemployment are not sufficient to describe the labour market completely. Statistics on informality are key to assess the quality of employment in an economy, and are relevant to both developing and developed countries.

ILOSTAT presents information from national sources on various indicators pertaining to informality. It features statistics on the share of informal employment in total employment and the share of employment outside the formal sector, disaggregated by sex and presented separately for the total economy and for non-agricultural activities. For users interested in more detailed statistics, ILOSTAT also includes the absolute values used to calculate these shares.

Informal employment comprises persons who in their main or secondary jobs were:

Statistics presented in ILOSTAT usually refer to the main job of employed persons.

The harmonized series on informality are derived by the Department of Statistics from processing national household survey microdata files using a consistent navigational path. The process involves identifying the production unit (formal sector, informal sector or household) and the nature of the job (formal job or informal job) of each employed person in their main job in order to derive the final indicators.

First, the unit of production is identified as either formal sector, informal sector or household. The operational definitions used are:

The definitions are derived from the following criteria: 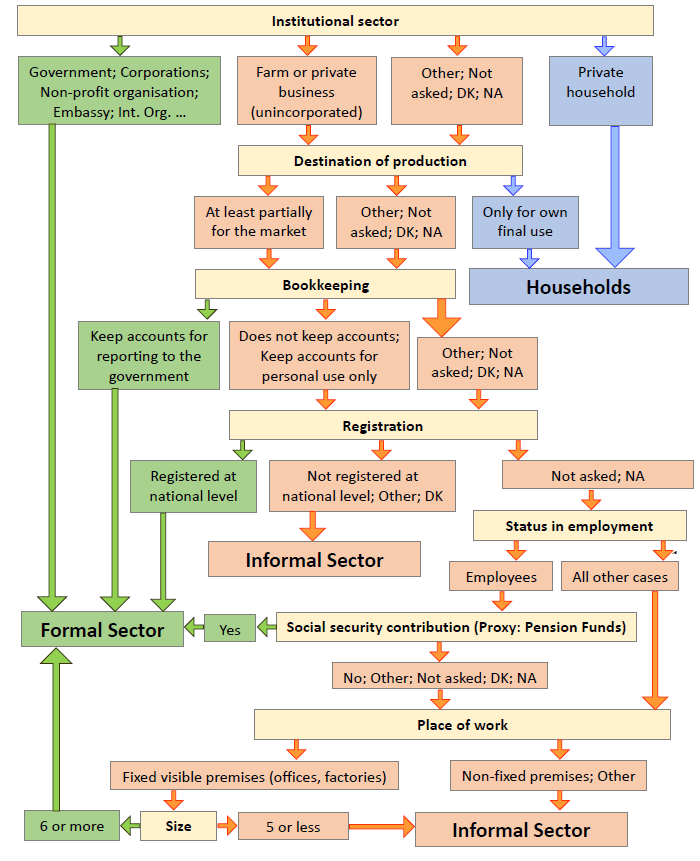 If questions on bookkeeping or registration are asked to all the persons in employment, the following criteria are not necessary.

The second step is to identify the nature of the job, i.e., whether the person is in formal or informal employment. The operational definitions are:

The definitions are derived from the following criteria: 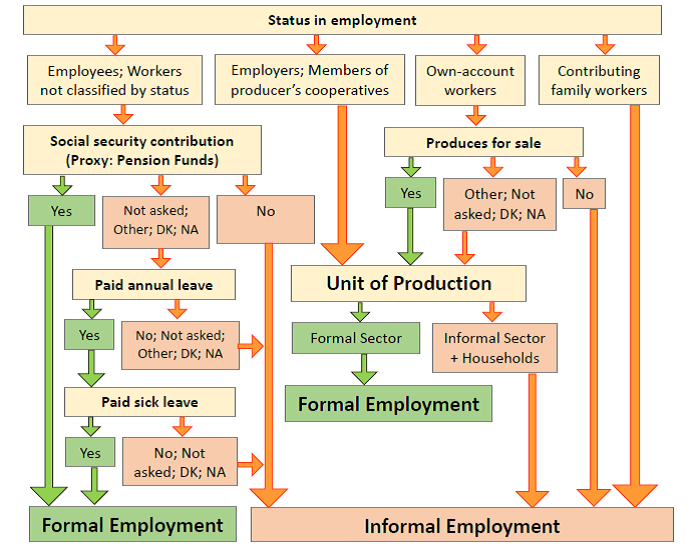 Labour force surveys are typically the preferred source of information on the informal economy, but to serve this purpose, these surveys should include questions specifically designed to capture information on informal employment. Such surveys can be designed to cover virtually the entire non-institutional population of a given country, all branches of economic activity, all sectors of the economy and all categories of workers, including the self-employed, contributing family workers, casual workers and multiple jobholders. In addition, such surveys generally provide an opportunity for the simultaneous measurement of the employed, the unemployed and persons outside the labour force (and thus, the working-age population) in a coherent framework.

Other types of household surveys with an appropriate module on informal employment could also be used as sources of data on the informal economy.

Interpretation and use of the indicator

Statistics on informal employment are essential for a full assessment of the contributions of all workers, women in particular, to the economy. Indeed, the informal economy has been considered as “the fallback position for women who are excluded from paid employment. […] The dominant aspect of the informal economy is self-employment. It is an important source of livelihood for women in the developing world, especially in those areas where cultural norms bar them from work outside the home or where, because of conflict with household responsibilities, they cannot undertake regular employee working hours”.1United Nations: Handbook for Producing National Statistical Reports on Women and Men, Social Statistics and Indicators, Series K, No. 14 (New York, 1997), p. 232.

The concept of informal sector was consciously kept flexible in order to accommodate differing country situations and specific country needs. In practice, this has led to a collection of national statistics on employment in the informal sector, with countries reporting on their preferred variation of the criteria laid out in the international resolution. Some countries apply the criterion of non-registered enterprises but registration requirements can vary from country to country. Others apply the employment size criterion only (which also may vary from country to country) and other countries apply a combination of the two. As a result of the national differences in definitions and coverage, the international comparability of the nationally-reported informal sector data is limited.

Given the lack of international comparability that arises from the flexibility of the concepts, the ILO developed a harmonized series on informal sector and informal employment. This was achieved by applying a consistent navigational path in processing household microdata files to define the production unit and nature of the job, thereby greatly reducing the variability of definitions used across countries. However, this does not imply that all criteria can be applied equally since each country’s questionnaire will contain different sets of questions. As such, comparability issues remain even in the harmonized series. As expected, there can be significant differences between the nationally-reported figures and those of the harmonized series, despite being based on the same household surveys.

Measuring informality: A statistical manual on the informal sector and informal employment (2013)​

This manual provides practical guidance on the technical issues involved in the development and administration of the surveys used to collect statistics on informality.